Ridin-Hy was opened in 1940 by Ed Carstens, a son of German immigrants. Raised in New York City, he loved the Adirondacks since he visited as a young man. He chose the ranch site (a former girl’s camp) because he felt a combination of horse and water activities would be successful. Orabel “Sunshine” Rollins was a guest in 1943 and the two married in 1944. Susan and Gary (Dude) arrived shortly thereafter. At first the ranch accommodated thirty guests – mostly single women and conditions were rustic.

The first lodging was twelve cabins. Ed and two helpers built the original main lodge in 1948. Each winter all the summer guests were invited to a winter party at Madison Square Garden rodeo in NYC. Power was generated on site and wintertime ice was cut out of the lake and stored in sawdust for summer use. Weekly charge was $27 per person.

Beginning in 1958 Ed and Orabel decided to become more family oriented adding a children’s social director and activities; Establishing Ridin-Hy as one of the premiere ranches in Warren County (There was more than 30 at the time) In 1970 Susan, her brother Gary and husband Andy Beadnell took over ranch operations from Ed & Orabel. The operating season was extended year by year until in 1975 the ranch was open year round.

At first the ranch accommodated thirty guests- mostly single women and conditions were rustic. The first lodging was twelve cabins. Ed and two helpers built the original main lodge in 1948. Power was generated on site and wintertime ice was cut out of the lake and stored in sawdust for summer use. This is known as “ice harvesting” and was popular technique used at that time. Weekly charge was $27 per person. Each winter all the summer guests were invited to a winter party in Madison Square Garden rodeo in NYC.

On July 20th 1982, the main lodge was lost to a fire – everything gone (records, food, housekeeping items, even beer!) After 2 days of 3 meals of BBQ, the 170 guests had to be asked to leave so we could regroup. They were told if we owe you a refund or you owe us – just let us know. 10 days later we reopened in a converted barn with a summer kitchen and “fire pictures” to explain to any newcomers why the facilities looked different from the brochure. The logs were cut off the back mountain immediately as you can only peel the bark off until mid-august. The first logs were laid Sept 3 and the building opened Dec 26th. The indoor pool was added a year later. Through the years log buildings were added and updated – all with the idea to keep in the theme with our rural settings (700 acres) 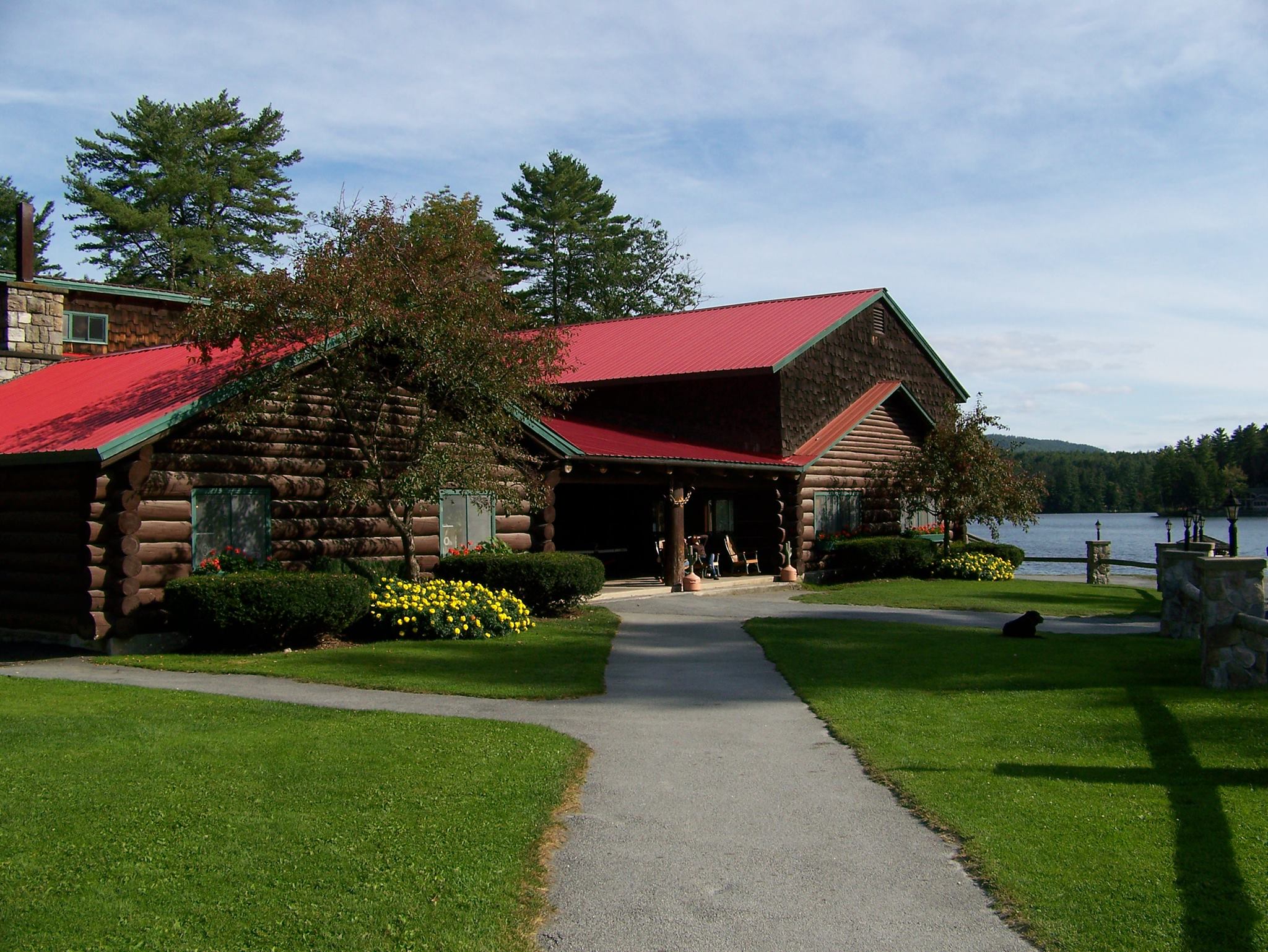 On October 27, 2017 the Main Lodge was lost to a fire. It was a beautiful Friday afternoon and all of our guests were out enjoying the sunshine. Some were horseback riding or getting massages, others were on fishing trips or lounging by the lake. Although we lost everything in the fire- kitchen, dining room, front desk, gift shop, cocktail lounge, bar & two storerooms, we were able to get everyone safely out of the main lodge. Almost all our 200 guests/staff went home that night- those that stayed brought pizza, coffee, water and good wishes to the Beadnell family. After some careful consideration we decided to use the Playhouse building for our temporary main building, so we could reopen December 26th. We were able to build the temporary kitchen off of the playhouse building and transform the indoor gymnasium into the dining room- that is where you area currently eating. Plans for the future Lodge are in preparation and the Beadnell Family are all looking forward to the future of Ridin-Hy Ranch.

The three Beadnell boys were raised on the ranch. Tim & Troy with their wives Patience & Carrie plus 4 little grand wranglers carry on the Ridin-Hy tradition of greeting many guests who have become like family – their children & grandchildren. The Beadnell family takes pride in providing a great vacation for all our guests, and raising their children in the beautiful Adirondack mountains.